The main goal of the Scripps O2 program is to document with precise measurements how the oxygen (O2) concentration of the atmosphere is changing.  Oxygen and carbon dioxide are influenced by many of the same processes, particularly processes that involve the formation and destruction of organic matter, such as fuel burning, photosynthesis, and respiration.  Carbon dioxide is additionally influenced, however, by inorganic reactions in seawater that have no impact on atmospheric O2.  Measurements of O2 in the atmosphere are valuable mainly because they can help to unravel the relative importance of these two sorts of influences on rising CO2.

O2 is a major component of the atmosphere, comprising roughly 21% by volume. The changes we detect are typically at the part-per-million level.  These changes are too small to be environmentally significant by themselves.  Carbon dioxide, in contrast, is roughly 600 times less abundant, so the same processes which produce only such small changes in O2 abundance can have a major impact on atmospheric carbon dioxide.

Measuring the changes in O2 is challenging because the changes are so small.  The data reported on this web site are measured using a technique developed by the project leader (R. Keeling) as part of his Ph.D thesis back in the 1980s.  The technique involves detecting changes in refractive index of air via a very precise measurement method known as interferometry.  The data are reported as changes in the O2/N2 ratio in “per meg” units. 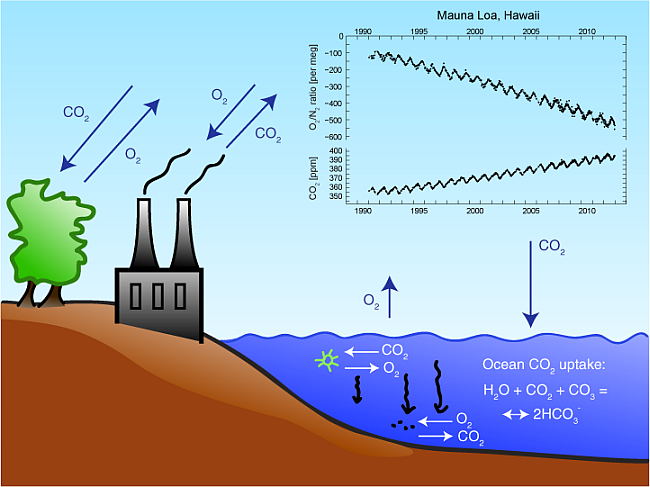